The bronze statue of Wesselényi Miklós is seated on a pedestal covered in white marble plaques, representing a scene of the 1848 revolution in which a peasant expresses his gratitude towards the baron Wesselényi, for abolishing serfdom.

It was conceived by the sculptor Fadrusz Janos, author of the statue of Matei Corvin from Cluj Napoca, cast in the Beschorner workshops in Ujpesti and unveiled on the 18th of September 1902.

The statue was erected as part of a program commemorating 1000 years since the descent of the 7 Hungarian tribes.
>> Sites Map

After 30 years the statue is contested, and in 1935 it is taken off its pedestal and taken to the penitentiary building.

After the Vienna dictate, the statue is relocated in 1942. After the war, the statue is declared class enemy and it is surrounded by a wooden fence painted in red, used as advertising support. Finally, the statue recovers her initial prestige. 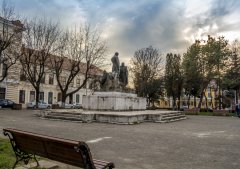 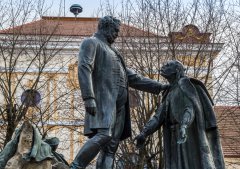 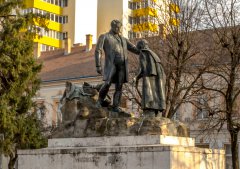 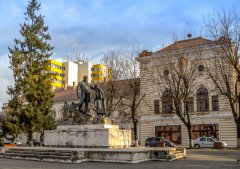 Prev Next
Read 2761 times
Tagged under:
Published in: Tourist Sites in Zalău